The Ribera healthcare group has invested in software that, with advanced data analytics and artificial intelligence, establishes biomarkers from MRI images, providing a “virtual biopsy” for a more accurate breast cancer diagnosis. Through its Futurs technology, Ribera has acquired 10% of the startup Kenko Imalytics, the driving force behind this project, which is endorsed and participated in by Valencia’s Polytechnic University (UPV) and with more than ten years experience in the researching of medical images, applying multivariate models based on latent variables (in statistics, variables that are not observed directly).

This agreement confirms the Ribera group’s commitment to one of its strategic cross-disciplinary departments, the Breast department, as well as to open innovation, with their collaboration with startups that develop projects for the healthcare sector. In addition, it is committed to Valencian talent associated with the universities and, especially, to reaching strategic agreements with the UPV, through its startup accelerator and its Biostatistics group. The university hospitals of Torrejón and Vinalopó, as well as Ribera Polusa, Ribera Povisa and Denia hospital are already integrated into Ribera’s Breast Department.

This advanced analysis software enables the recording of biomarkers, using data analysis from thousands of MRI images and artificial intelligence, with the aim of providing information about breast lesions “at pixel level”, predicting cancer early on, detemining the precise stage and presenting it to the radiologist in a format that is easy to interpret. The Ribera group participates in the development of this tool through its Breast Department, which is led by Doctor Julia Camps, to transform it into a platform that helps radiologists in decision making regarding breast cancer, thanks to its more accurate, contrasted analysis which is constantly updated. Doctor Camps reiterates that Ribera’s hospitals have the best professionals and the most advanced technology for diagnosing breast cancer and adds that “tools like this software allow us to advance in precision medicine and provide patients with a better clinical and surgical approach, in an even more personalized way, based on data analytics and artificial intelligence, which will provide increasingly accurate results”

The Chief Executive Officer (CEO) of Kenko Imalytics, Eric Aguado, has pointed out that “this software can reduce false diagnoses, both positive and negative, by a significant percentage”. With regard to breast cancer, which is one of the malignant tumors that has become most globally widespread and has advanced most in terms of therapy over the years, we now have very promising results. We are getting closer to a total reduction in  prior incorrect assessments by doctors and improving the results of biomarker identification software currently available on the market”, he affirms.

When a diagnostic imaging professional uses Kenko’s algorithyms “they have an efficient, agile and intuitive tool that allows them to assess a breast cancer case with greater certainty”, as Aguado explains. He insists that one the greatest changes regarding their biomarkers is that it reduces the gap in knowledge between Radiology specialists since “ if cancer is suspected, using our artificial intelligence means that both a resident and a professional with many years of experience will be able to clear up any doubts quickly”. 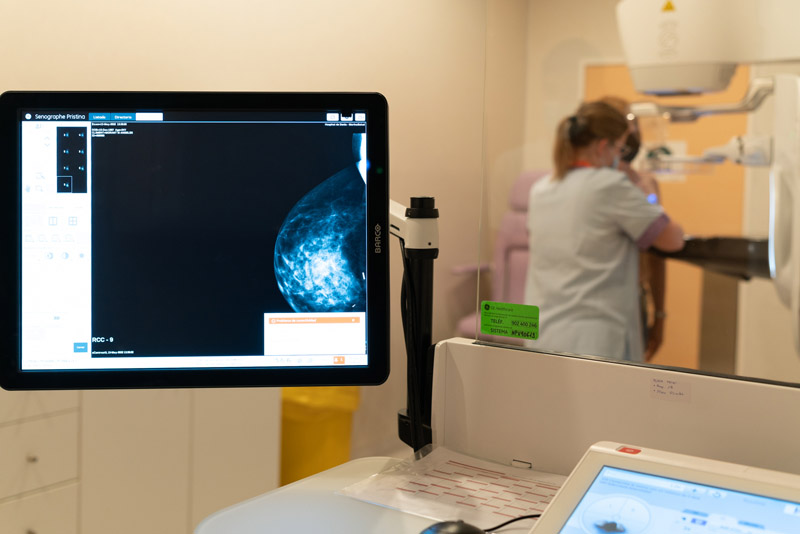 Detecting a tumor when it has barely begun to form. Contrast-enhanced mammography at the Ribera healthcare group‘s hospitals is so precise that it enables them to detect the network of vessels that are formed at the start  of a tumor. In this way, specialists with extensive experience in breast pathologies, such as Doctor Julia Camps, the corporate manager of the Breast Department, can diagnose the formation of a tumor even when it has barely begun to grow, and thus make clinical decisions and a therapy plan for the patient earlier. “Early detection is key in order to achieve the best results in the treatment of each patient”, affirms Doctor Camps.

“Contrast-enhanced mammography is a very new technique, which consists of injecting an iodine-based contrast into the patient and bringing to light tumors that a normal mammogram would not detect because structures overlap and many tumors are hidden”, explains Julia Camps.

After two and a half years of applying this diagnostic technique at Torrejón University Hospital, and just over two years at Vinalopó University Hospital, the results of the use of the contrast-enhanced mammography are very good, especially in cases whereby patients had breast cancer previously, as well as in those that where unable to have an MRI”, explains Doctor Camps, referring to women with heart problems, claustrophobia or those who are overweight.

Contrast-enhanced mammography at these two hospitals within the Ribera healthcare group is up to 30% more sensitive than a conventional mammogram, and is able to detect tumors of just 4 millimeters, and even the formation of vessels at the beginning, which normally, she adds, “wouldn’t show up until two years later”. In the case of patients that have previously had  breast cancer, it is sometimes difficult to small tumors with a conventional mammogram, as the corporate manager of the Breast Department explains, “due to the changes in the breast after the previous treatment”. In addition, she adds, “the morphology or form of these lesions may go unnoticed if the surrounding tissue is very dense or heterogeneous and, for that reason, we take advantage of the capacity of functional techniques such as contrast-enhanced mammography or MRIs to highlight the tumoral angiogenesis or function that allows for the detection of cancer independently from its morphology”. With this technology, she assures, “we are in a position to give patients maximum guarantees that a new lesion has not appeared, no matter how small, when they have their follow-up mammogram”.

Doctor Camps reiterates the “vital importance” of these contrast-enhanced mammograms for patients that, for various reasons, are unable to have an MRI. “Patients that have claustrophobia, that cannot lie on their front or that have cardiac or respiratory problems, can have access to their tumoral map thanks to this technology, and with the same reliability as that of an MRI”, she affirms.

The surgical coordinator of the Breast Department, Doctor Lorenzo Rabadán, is of the same opinion. “New technology, such as MRIs with diffusion software and contrast-enhanced mammograms offer us an image of breast cancer that we have never had before. You could almost say that we operated based on hearsay, because we didn’t see the full reality of the tumor, and this technology now brings us closer to the reality of their tumor, with its appendages and nodules that we didn’t see earlier”, she explains.

In this  video, Doctor Julia Camps, Doctor Laia Bernet and Doctor Lorenzo Rabadán explain what this is and how a contrast-enhanced mammogram is done. 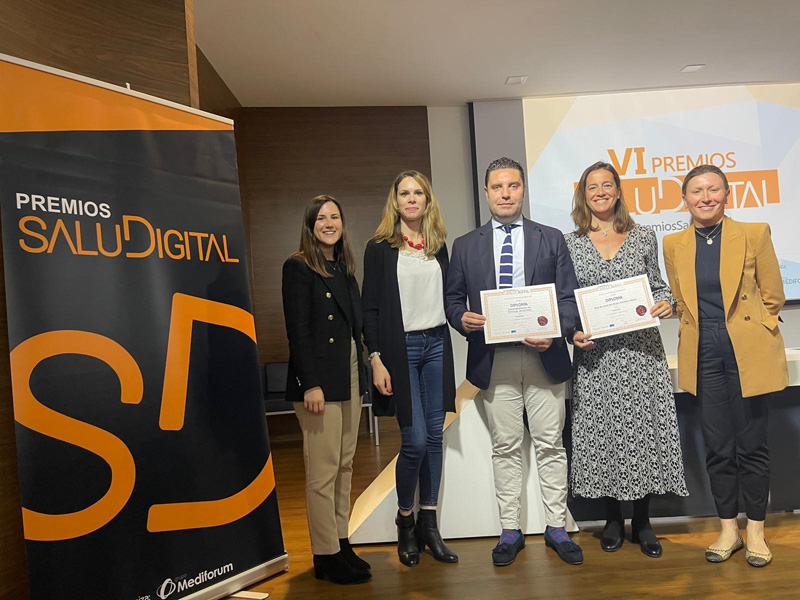 Ribera, a finalist in the digital health awards with their shoulder telerehabilitation project and their health blog

The Ribera healthcare group has been named as a finalist for the two Digital Health award nominations for which it has presented projects this year. The 6th edition of these prestigious national awards has seen the telerehabilitation project for shoulder pathologies, carried out in three of the group’s hospitals, and Ribera’s health blog, selected as finalists in the Best Telemedicine project and Best Health blog categories.

The Digital Health awards aim to recognise initiatives that are carried out in the field of health, in both the public and private sector, which contribute to improving health, well-being and quality of life through new information and communication technologies, also known as eHealth, as they state. The Ribera healthcare group highlights both acknowledgements given that “they are very competitive awards and there are a lot of high quality projects that are presented every year, so being one of the two finalists in two categories is a great success”.

In April, 2021, the Ribera healthcare group launched a telerehabilitation program for patients with shoulder pathologies in the university hospitals of Vinalopó and Torrejón and in Ribera Povisa Hospital. This pilot project, carried out with the startup Trak, chosen in the Lanzadera corporate program, consists of a remote rehabilitation program and the monitoring of patients which enables their recovery with an in-depth follow-up from healthcare professionals, since they not only provide exercises but also guarantee that they are done correctly. The technology used is based on artificial intelligence and computer vision. The aim of this project is to evaluate the improvement in adherence to treatment regarding patients with this specific pathology and the progress made in their recovery. Sixty patients have participated in the pilot in total.

Regarding the group’s health blog, and although the first publication was more than ten years ago, their web positioning has significantly improved, thanks to the contribution of quality content from the professionals of the nine hospitals, 60 primary healthcare centers and seven Ribera clinics and the teamwork of the Communications Department. This combination of factors has allowed them to produce publications on a regular basis that are specialized but very accessible to the general public, as well as complementing this written content with other audiovisuals, which are of great interest to patients. It has also enabled them to improve their dissemination on social networks, including graphics, cartoons and reels. In 2021, the Ribera group’s health blog had 466,252 v[iews, 235,303 users and 269,855 sessions and the five most viewed entries were: Taking gastric protectors on a regular basis; topical medication, are you using it correctly?; the new Covid strain, symptoms, severity and resistance; and doing sports whilst on your period.